Who is RACHAEL TYRELL??

I’m now online in various channels, including OnlyFans and Patreon. I enjoy being creative in many forms, DJing and playing my bass, working out (especially with saber fencing), and making art, including my self-portraits. I’ve also been told that I’m a fairly skilled developer, so I do that, too.
I’ve got no shame in being an NSFW content creator and I hope you’ll take a peek and decide to get to know me and buy all of my things! Don’t forget to follow me on Instagram and OnlyFans – as that’s where I’ll post updates to my content. (IG: @iamrachaeltyrell and OF: @rachaeltyrell)

2020 shall be known as the year I emerged from the ashes, rising like a phoenix, owning my power and experience while reclaiming and embracing my femininity.

I saw that on another blog somewhere. One should also dress occasion appropriate instead, and I agree 1000%.

I’ve been constantly challenging myself in terms of what it means to be an adult and I’ll elaborate more on this in future posts.

Born in Los Angeles, my style icon is Rachael Tyrell and I’m growing into her. Who doesn’t want to be a replicant?

I’ve admired many women over the years. Whether historical, fictional, past and present, I pay homage to them in my own way by recreating myself and reinterpreting as I go along. There’s no definitive manual on being me, so I’ll share what I can along the way with you.

So who do I think I am, really? In my opinion, being alluring never dissipates, but certainly morphs over time. If you can create yourself, you can also evolve with yourself.

I honestly feel better now than when I was younger and weighed 92 lbs., go figure. I did all the “right” stuff, but why did it feel so wrong?

You’re not supposed to start modeling when close to 30!

At one point I turned down a lot of gigs (a random one including the cover of DDI International and more) because I can be socially awkward like that. World domination would have to wait, until now, that is….

Here’s a small sampling of some of my historical appearances over the years.

This doesn’t include my DJ appearances and residencies, which I’ll gather at some point. I was a fairly successful jungle/drum and bass DJ back in the day (started officially “spinning on the wheels of steel” in 1996). I was ahead of my time.

2003
Chad Michael Ward photoshoot. I’m in his book Black Rust.
One of the images from that shoot is part of a DVD cover of 4 not so good horror movies (none of which I appear in).
I’ve been told that I’m occasionally still available in the bargain bin at Best Buy. Hey, someone’s gotta have a claim to fame! Here’s proof: 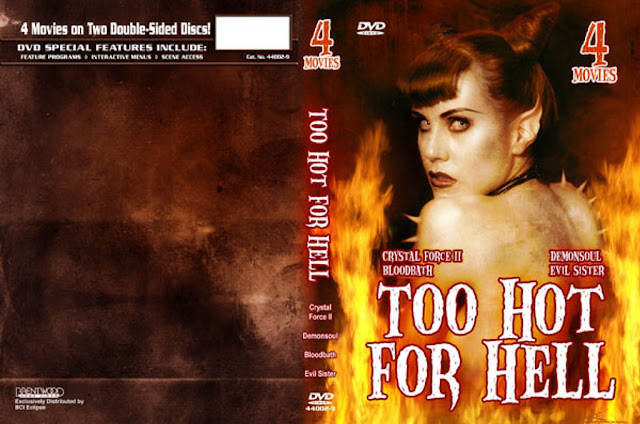 Are YOU Too Hot For Hell? I didn’t think so, so there.

I feel as if I’ve lived a few lifetimes already and I think I have four lives to go, if the nine lives thing is true. I also had an interesting job after I semi-retired from modeling. I used to be the junior bookkeeper for one of the most popular alternative pinup naughty sites. “We’re not p0rn, we’re pinup!” Ok then….

That website took me across the country and has been responsible for some major things in my life, for better and worse..

Oh yeah, I’m still a licensed esthetician.
If you watched any tv or movies during in the late ’00s, chances are that you saw me in the background of major stuff.

I loved working on Dexter and House, MD. The first Ironman movie was incredible.

Regarding my so-called dancing career…

This pic was taken at a now closed down club that’s now a fancy dispensary.
I was unsure very unsure about returning to one of my plans B-Z, in being a paid, professional sexy person.

RIP to my Tokidoki x Hello Kitty bag. You were wonderful while you lasted, which unfortunately wasn’t very long! $3 thrift score that the designer of Tokidoki, Nicola, actually liked on my IG. Super cool. 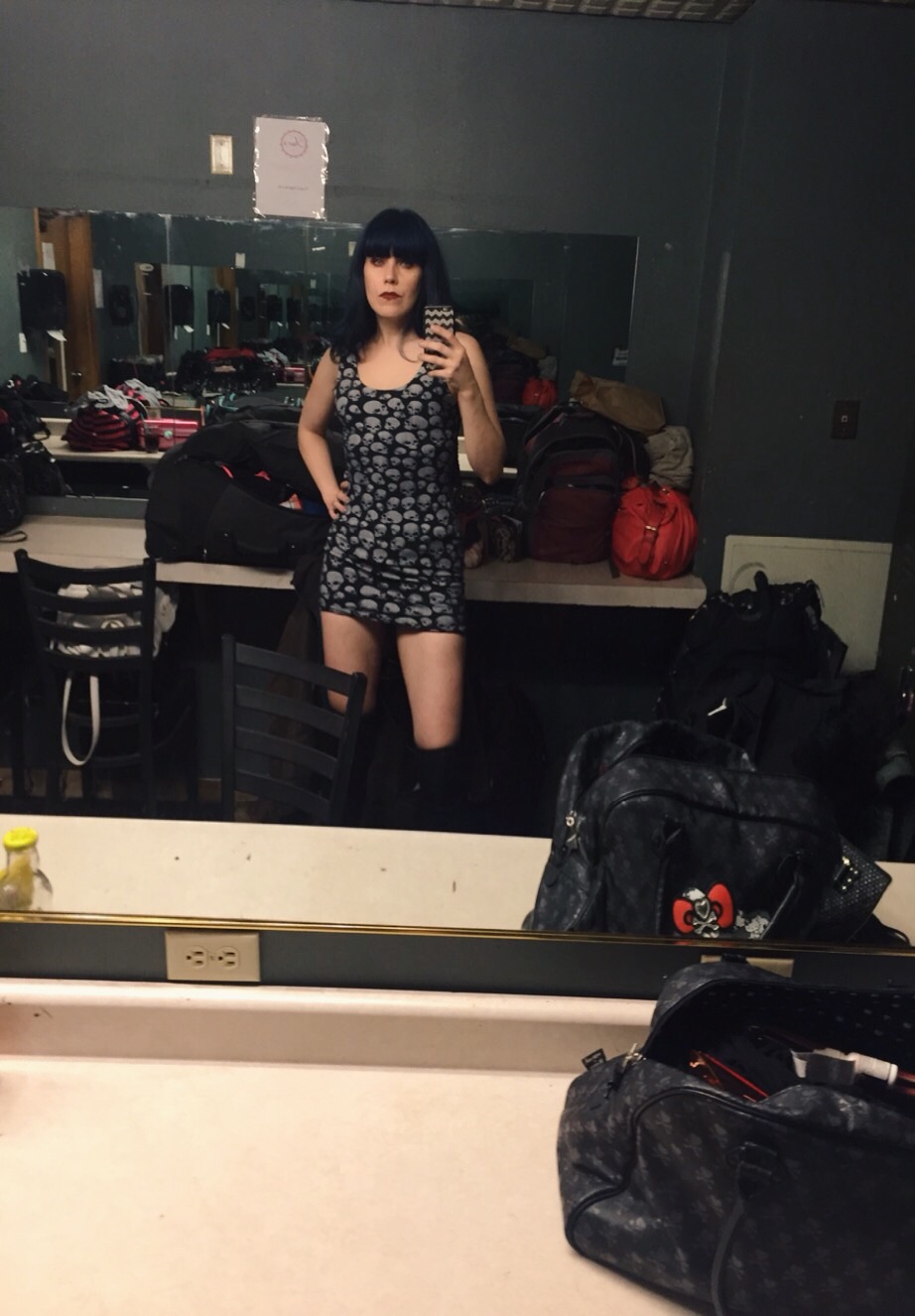 What else would you like to know?
I’m obsessed with thrifting and you should say hi if you see me at a Goodwill Outlet (“the bins”) in your city or town. Almost everything in my wardrobe is thrifted!
I’m also kind of obsessed with lingerie, so what better thing to be preoccupied with than burlesque?

This is currently my favorite set of lingerie and it’s from Bettie Page Lingerie by Playful Promises. I’m a 32D-DD, can corset down to 23″, and am very physically active.
I should dedicate a post to all of the workouts I do for free on YouTube. You CAN get into shape without the gym!
It’s important to feel good, especially during unprecedented times like these. 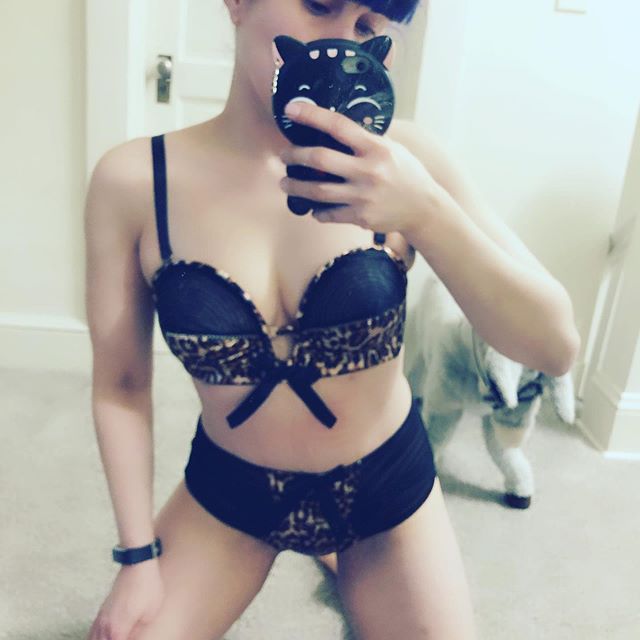 I’m also obsessed with trashy breakfast cereals like Apple Jacks and Fruity Pebbles (see the working out thing) and could probably drink my weight in Thai Iced Tea. No joke. See exhibit A below. 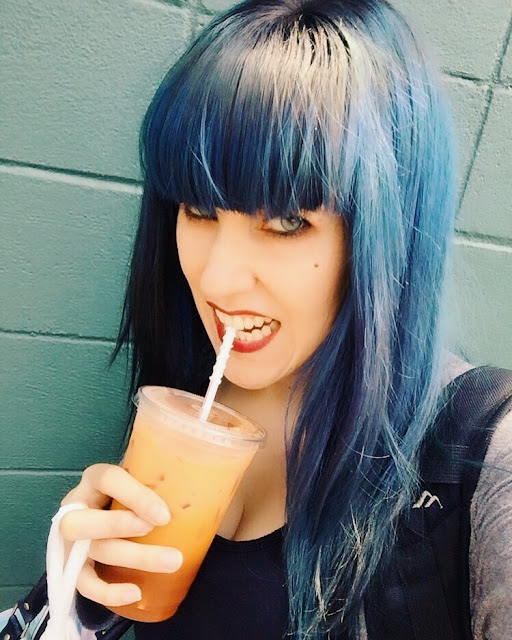